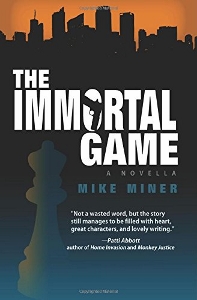 If you found this book lying around somewhere with the covers torn off, and you started reading it, you might think it was a Dennis Lehane novel. It’s crime fiction set in Boston, and its primary characters are mobsters and a wounded cop, but more importantly, the characters and language have great depth. This is no accident.

Mike and I attended the same MFA program in Boston where Lehane is faculty, and all good stories—Dennis would tell us—have depth of character, story, language, and insight (or what I call the Four D’s, and I’ve done numerous blog posts about this). Now, this is a short novel, or novella, and I wouldn’t say the story runs particularly deep, but what Mike has done with the characters and the words on the page would make Mr. Lehane proud. As Dennis said in an early interview:

“I say to my students right off the bat, if there’s not depth of language, if you don’t bring some sort of music to your prose, then please go do something else. Hollywood can beat us in the car chases and the explosions and the high drama. All we have is language and the depth of character, the ability to take you through a life, as opposed to suggesting it.”

It seems Mike took this advice to heart. He has drawn us into the lives of his characters, and he has given us prose that sing. To wit:

His son dead.
His wife gone.
Sooner or later that dark whirlpool sucking at your feet, pulling at your legs, that bitch, despair, wins the battle and pulls you under to a dark world full of shadows and whispers, an inferno where hope is abandoned and everything is your fault.
But this wasn’t hell. There were ways to quiet the voices, dim the fingers pointing at you. Boston’s an easy town to drink in. Especially when everyone knows your name.

That passage, you can probably guess, is from the point of view of the damaged cop. In the following scene, two professional killers meet on a dark street:

“Nice night for a stroll.”
The German paused. A smile on his face as he turned slowly toward the voice, the man from the coffee shop. The killer. A deep voice, ragged, and just a bit playful. The man knew what he was playing, who he was playing with. The German could see the tension in him, an echo of his own. Both men poised, ready for a sudden move.
Their eyes met, eyes that had seen a lot of people die in front of them.
“Yes, it is,” the German said.
Now is not the time, their eyes said, but both men felt the chilly knowledge that the time would come. Soon.

Words like these, words that take us deep into the lives and thoughts of the characters, this is what separates the written page from the screen. And like Dennis Lehane says, as writers our words are all we have, and Mike Miner has given us words that sing.

That’s right. The Organ Takers launches today and is now available in hardcover, paperback, and e-book formats from all of the major retailers. Go to the preview page to learn about the story and what inspired it. Go to the books page for links to retailers. View the latest book bubble here.          Watch… END_OF_DOCUMENT_TOKEN_TO_BE_REPLACED