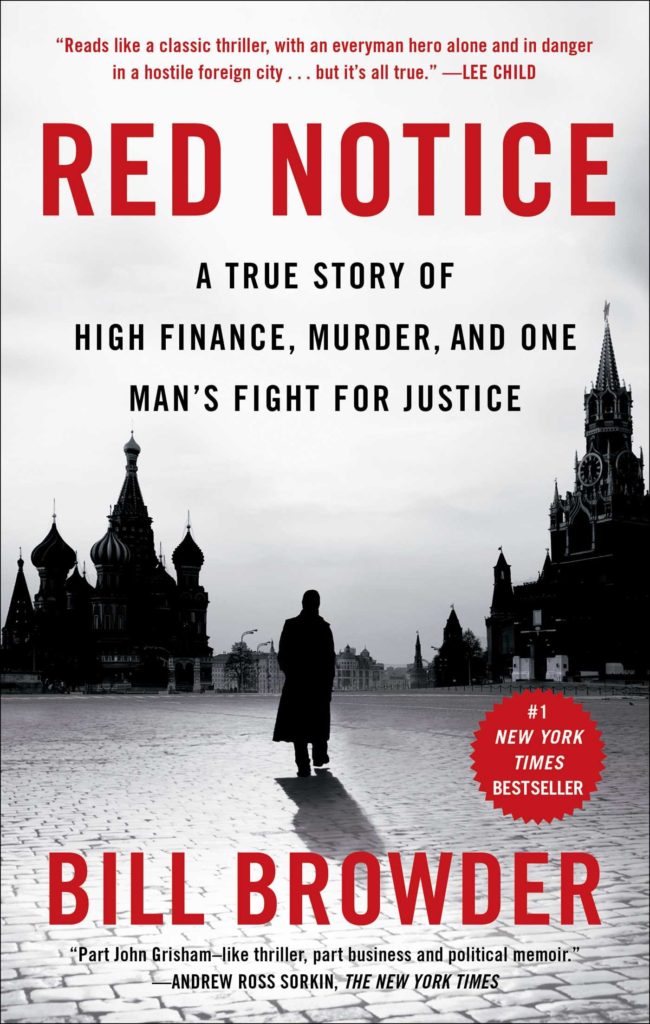 Red Notice  n.  A communication issued by Interpol requesting the arrest of wanted persons, with a view to extradition. An Interpol Red Notice is the closest instrument to an international arrest warrant in use today.

In my humble opinion, Vladimir Putin is the most dangerous man in the world. Yes, we have ISIS, who is cutting off heads, throwing non-conformers off buildings, or burning them, or drowning them in cages–all heinous acts for sure–but Putin has nukes, and a massive military, and the will to return Mother Russia to the glory days of the Soviet Union.

Prior to reading Red Notice, I viewed Putin as a leader who uses strong-arm tactics and had no problem “eliminating” dissidents within his own country, but still, I thought of Russia as a democracy where capitalism and free choice had gained a solid foothold. After reading about Bill Browder’s experience as one of the first venture capitalists to invest in post-communist Russia, I came to the conclusion that Russia is nowhere near a democracy.

Modern Russia is a country run by oligarchs. What is an oligarch, you ask? An oligarch is a member of an oligarchy, and an oligarchy is a form of government in which all power is vested in a few persons or in a dominant class or clique. It is government by the few. In Putin’s Russia, the oligarchy consists of the twenty-some-odd men who stole 39 percent of the country’s wealth after the fall of communism. They became billionaires overnight, they own the majority of the companies traded on the Russian stock market, and they have robbed those companies blind. This is current-day Russia.

Enter Bill Browder and his firm Hermitage Capital. Red Notice tells the story of Browder, a Wall Street financier, who is one of the first investors to enter the emerging markets of post-Soviet Russia. Hermitage Capital does well in its first decade and amasses 4.5 billion dollars in assets, providing its earliest investors with a 1500 percent return. But this high level of success does not come without peril. Along the way, Browder has challenged the corruption of the oligarchs, making many enemies along the way.

Now, if you are a Russian oligarch and a Putin crony, and an American comes along and pilfers 4.5 billion in assets from the mother country and steps on your feet along the way, what do you do? You steal it back. If you are an American financier and the assets of your company have been illegally seized with the backing of the government, what do you do?

This is where the story turns ugly. Browder appeals to the proper government agencies and officials for help, but the entire system is mired in corruption, so no help there. He then finds a Russian lawyer, Sergei Magnitsky, who conducts himself with integrity, ethics, and morals, but as Magnitsky exposes the various frauds committed by tax officials, he is imprisoned and tortured to death.

A grieving and furious Browder then embarks on a crusade to expose the rampant corruption of Putin’s regime, which culminates with the passage, by the U.S. Congress, of the Magnitsky Act. The act bans eighteen Russian officials implicated in the lawyer’s murder from entering the U.S. or using its banking system. Putin famously retaliates with a law banning Americans from adopting Russian orphans, and barring certain U.S. officials from entering Russia.

This back-and-forth battle between Putin and Browder finally culminates with a Russian court convicting Browder (in absentia) and Magnitsky (posthumously) of large-scale tax evasion, and sentencing both to nine years in prison. During the trial, Putin successfully petitions Interpol to issue a Red Notice for Browder, which means if he tries to cross any international border, he will be arrested and potentially extradited to Russia.

And this is where it gets dicey for Browder. When the Red Notice is issued, he is in Norway delivering a speech to a human rights group as part of his effort to get European countries to pass laws modeled on the Magnitsky Act. Norway has a stellar record when it comes to human rights, but it also shares a long history and a long border with Russia. What will the Norwegian officials do when Browder tries to board the flight that will take him home? Well, you’ll have to read the book to find out.

As it says in the subtitle, Red Notice is the true story of high finance, murder, and one man’s fight for justice. In his blurb at the top of the cover, Lee Child says Red Notice reads like a classic thriller. I couldn’t agree more. In fact, as I was skimming through the story to write this post, I suddenly had the urge to reread the entire book. That is a testament to the excellent writing and the thrilling true story that is Red Notice.

If you’ve read this book, or you end up reading it, please leave a comment and let me know what you think.

← Would You Terminate a Life …
The Organ Growers – Available for Preorder →