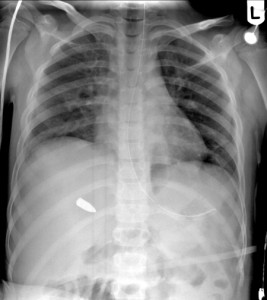 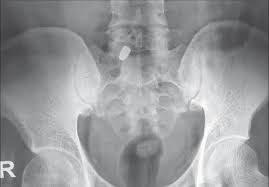 Trauma is a recurrent disease? What does that mean?

This is one of the many truths I learned as a surgery resident at LSU. Most of the traumatic injuries we treated were associated with drugs, alcohol, firearms, stabbing implements, blunt objects, motor vehicles, or any combination thereof. Despite suffering serious and often life-threatening injuries, a significant proportion of these individuals failed to modify their behavior and returned to the ER as “repeat customers.”

It was not unusual to obtain a routine chest x-ray or abdominal film as part of the workup for a motor vehicle accident and find bullets or shotgun pellets related to a past injury. If the patient was awake and alert, or if we had their medical records and they had been treated at LSU, we could usually confirm a history of penetrating injury, often treated by a trip to the operating room.

Now, I know what you’re thinking. If someone had been shot in the past, why wasn’t the bullet removed, particularly if they had been operated on for the injuries related to the gunshot wound? Operating on the human body specifically for the removal of bullets is the stuff of TV and movies. When a patient is taken to the OR for abdominal exploration, the damage caused by the missile (the medical term for bullet) is treated, but unless the missile is readily apparent, it is left behind. Why? When a projectile travelling 3000 ft/sec rubs up against the air, it is superheated and thus sterilized, and therefore, does not result in infection once it comes to rest.

Having said that, if the missile passes through a particularly dirty piece of clothing and seeds the path of the bullet with cloth fibers teeming with bacteria, an abscess may subsequently form and require attention at a later date, but at the time of surgery, unnecessary exploration and dissection of uninjured tissues–often in an unstable patient–causes more harm than good.

And finally, why is all this surgical stuff on an author website? As I said last time, if you find medical and surgical topics fascinating, you’ll be interested in my stories. The Final Push is a short story that nicely represents my writing style. It’s the first piece of fiction I wrote and has served as a precursor for everything I’ve written since. The style is similar to what you will see in the McBride trilogy of novels—The Organ Takers, The Organ Growers, and The Organ Killers—so if you like The Final Push, you’ll like the McBride trilogy.