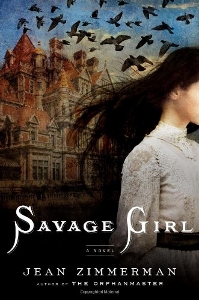 They say we don’t choose the books we read, that the books we read choose us. If that’s the case, Jean Zimmerman’s Savage Girl grabbed me by the throat, shook me violently, and screamed READ ME! Why would a book do that, you ask?

The first third of the novel takes place in Virginia City during the Comstock Lode silver rush. I grew up thirty miles away, in Reno, Nevada, and visited Virginia City and her silver mines at least twice a year. The protagonist of the story is a Harvard student striving to become an anatomist. As a former surgeon I, too, was an anatomist. The story moves from the wild west to the high-society civility of 1870s New York. As my medical training progressed, I also left the west behind for the sophistication of New York City.

And finally, throw in an alluring eighteen-year-old girl who was reportedly raised by wolves in the Nevada desert, then forced to perform in a ramshackle sideshow for the bemusement of miners where she would slash at the air, the dirt, and the barn wall with dagger-like claws fixed to each hand, and as this savage of a girl travelled cross country with a rich family on their private train, a trail of mutilated bodies was left in their wake.

Now that’s a book that speaks to me, and after reading the first few sample pages to see if I liked the “voice” of the narrator (narrative voice is my litmus test), I clicked the buy button, and I’m glad I did.

The story opens with Hugo Delegate, of the fabulously wealthy Delegate family, standing over a badly mutilated body in a Gramercy Park mansion. Unsure if he has committed the murder, he decides he’ll assume responsibility anyway in an effort to protect whom he thinks is the likely culprit, his adopted sister, Bronwyn, formerly known as Savage Girl. Young Hugo is subsequently arrested, booked into the Tombs, and released to a pair of the family’s attorneys. As a means of confession, Hugo recounts for the lawyers the Delegate family’s journey via private train from Virginia city–where they “acquired” Savage Girl–to New York where the Delegates intended to civilize their newly adopted daughter and debut her to Manhattan’s highest echelon of society.

However, Bronwyn is quite beguiling, and as she succumbs to the advances of numerous male suitors, both during the journey home and upon arrival in New York, the men uniformly end up slashed, gashed and disemboweled. Is this the result of a feral young women forced to conform to the norms of the civilized world, or is it the handiwork of a self-dramatizing jealous young man who is very good with knives and prone to blackouts? Not even young Delegate knows the answer to this as he stands over the mutilated body of an old friend, in an opulent study overlooking the Gramercy Park neighborhood of Manhattan.

If you’ve read, or end up reading Savage Girl, please leave a comment and let me know what you think.

← Writing on the Nose: what it is and why not to do it.
PubSmart: the next great writing conference? →