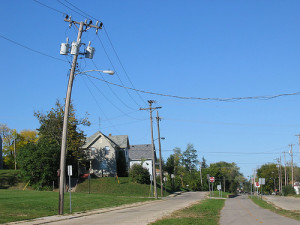 What happens when a young man drives his convertible into the base of a power pole and the electrical transformer falls in his lap? And what does that have to do with the building of fictional characters?

As writers, a great deal of ourselves end up in our characters. Some of our personality traits become theirs. Our life experiences may be shared with them. They often see the world as we see it. My career as a surgeon has certainly influenced the composition of my characters. In part 5 of the Me Myself and I Interview, I recall one incident in particular that demonstrates the usefulness of suppressing strong emotions, a trait found in several of my characters.

Me:  Okay. We’ve covered crazy with the ER thoracotomy case (part 3), and satisfying with the Organ of Zukerkandl case (part 4), so what would you say is the most horrendous thing you’ve seen?

Myself:  I spent time in level I trauma centers in the Midwest and South, and I spent two years in Bellevue, New York City’s flagship public hospital, so I’ve seen a lot of horrendous stuff, but the worst thing I have ever seen is so bad I think it should stay locked in the vault. I don’t really see any reason to bring it up here, in this setting, which is an author’s website. I’m not sure it’s relevant.

Me:  I believe it is relevant. Your characters are medical students, surgical residents, attendings and nurses, and your experiences are infused into each of them. Your experiences inform how these characters act, what they say, and how they see the world around them.

Myself:  Alright. You have a point, but let me warn the readers: what follows is extremely graphic. Unless you have a morbid fascination with the mayhem that can be wreaked upon the human body, I suggest you skip to the next part of the interview.

Me:  Your warning is duly noted.

Myself:  I was a medical student in St. Louis and on call for the surgery service when the third-year resident drug me out of bed at four in the morning. He told me we had a trauma admission in the surgical ICU, and he warned me that what I was about to see was exceptionally horrific, and if I couldn’t handle it, he would not fault me for leaving the room.

Me:  Considering that by this point in your young career you had seen a number of gunshot wounds, stab wounds, and blunt trauma cases, this warning must have seemed ominous.

Myself:  It was ominous. I knew this resident well (he later married my girlfriend’s sister), and like all surgery residents he was a stoic guy, but as we walked to the ICU I could tell he was anxious and upset.

Me:  You get to the intensive care unit and what you see?

Myself:  First, a swarm of activity much like the emergency room scenes in my stories—the cutting off of clothes, the placement of large bore IVs in each arm, the insertion of various monitoring catheters. But at this point the patient is covered from the chest down by sheets, so I’m still not sure what kind of an injury we’re dealing with.

Me:  Then the surgical attending arrives, and the sheets are removed so he can assess the injuries.

Myself:  Yes, and what I see is beyond comprehension. An intoxicated young male driving a convertible had run his car into the base of a power pole. A transformer had fallen from the pole and landed in his lap, sending tens of thousands of volts of electricity down his legs and through his feet where the floorboard of the car served as a ground. Judging by the amount of soft tissue loss, we surmised that the patient had lost consciousness at the time of the accident and had sat there for an indeterminate amount of time with electricity flowing through the lower half of his body.

Me:  And when you say soft tissue loss, you mean total loss in some areas.

Myself:  Tissue loss unlike anything I had ever seen, or have seen since. There was nothing but bone and connective tissue from the knees to the feet. Ligaments kept the bones of the feet intact, and held the feet to the ankles, but other than bits of tendon and muscle, the lower legs had been stripped clean. From the hips to the knees the skin had been burned away, leaving charred muscle, and from the umbilicus to the pelvis the skin was present but had the gray pallor of a cadaver, meaning it was dead.

Me:  I’m sure the readers are wondering why the patient wasn’t electrocuted as soon as the transformer landed in his lap.

Myself:  People die from electrocution when the current passes through their heart and disrupts the electrical system, thus causing a fatal arrhythmia. In this case, the current was entering the pelvic region and exiting through the feet.

Me:  It doesn’t seem possible that an injury of this magnitude is compatible with life.

Myself:  Generally it’s not. Tissue damage releases inflammatory mediators that ramp up the immune system and start the healing process. On a small scale this is useful, like if you smash your thumb with a hammer or break a leg. Massive tissue damage, however, sets off a cascade of events that results in total body inflammation, or SIRS (systemic inflammatory response syndrome). This overreaction by the immune system overwhelms the organ systems of the body, resulting in derangement of physiologic processes, followed by multiple organ failure, shock, cardiovascular collapse and death.

Me:  In light of such a dire prognosis, he was emergently taken to the operating room.

Myself:  His only chance for survival was to remove as much dead and injured tissue as possible, as quickly as possible, so we rushed him to the OR.

Me:  For the readers out there, if any of you are still with us, this is where it gets quite graphic.

Myself:  (nodding) Yes, very graphic. We started with bilateral hip disarticulations, which is the surgical term for amputating the legs at the level of the hip joints. We then debrided all the dead skin and underlying abdominal wall musculature from the umbilicus to the pelvis. We also removed the genitalia and a significant portion of the gluteus maximus musculature and overlying skin.

Me:  And he survived the operation.

Myself:  He did, but our efforts were futile. About an hour or so after returning to the SICU, he suffered complete cardiovascular collapse and could not be resuscitated.

Me: So, in summary, you are awakened in the early morning hours and taken to the intensive care unit to participate in the care of a patient who has suffered a horrific injury. You accompany him to the OR where you essentially remove the lower half of his body, and an hour later he dies. How were you feeling at this point? This is clearly the worst thing you’ve ever seen in your young career.

Myself:  I think I can safely say this is the worst thing everyone working with this man had ever seen. As for myself, I handled it well. In fact, while some of the staff were struggling to keep it together, I was focused on the measures being taken to save the man’s life. Granted, I knew the real tragedy would set in when the family arrived—maybe mom and dad, or a wife with young kids, we didn’t know—but for the time being, I had to suppress some highly charged emotions and focus on the task at hand.

Me:  This ability to suppress emotion is important to surgeons.

Myself:  Particularly when faced with such a critical situation. There’s a time to act, and there’s a time to feel. In a case like this, action must come first, and it must not be impeded by emotion.

Me:  And you were a medical student at the time, so this served as a litmus test of sorts.

Myself:  Yes. This experience taught me I could suppress strong emotion with the flip of a switch, which made me comfortable with my decision to go into surgery. I figured if I could handle something like this, I’d be able to handle anything a surgical career could throw at me.

Me:  Now that your career is over, has this borne itself out? Were you able to handle everything that was thrown at you?

Myself:  I had my moments, particularly when delivering bad news to families—mothers, fathers, wives, husbands—but for the most part I was able to contain my feelings until I was alone.

Me:  We see this stoicism in your characters as well.

Myself:  Yes. Stoicism is a hallmark of the surgical personality whether it be a surgeon, scrub nurse, or ICU nurse, so for the sake of authenticity, I’ve given my characters a healthy dose of it. As I’ve said before: surgery, surgical diseases, and the operating room are all inherently dramatic, and it takes a unique personality to handle that drama.