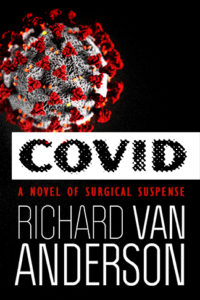 I know what you’re thinking: a hastily written piece of schlock thrown together by a hack writer who wants to exploit a situation that is raining down hardship, tragedy, and uncertainty on the world. This is not the case.

Eighteen months ago I began writing the third and final installment of the McBride trilogy. It was a story about a deadly influenza virus that ravages a village in the mountains of Iran—which happens to reside near a BSL 4 laboratory—then spreads to Tehran and other Iranian cities, ultimately decimating the country. From there the viral plague spreads throughout the Middle East, China, Russia, and so on until all of America’s enemies are vanquished. The United States blames Iran for a bioweapons experiment gone bad. Iran denies it and asserts the virus was weaponized and then released in Iran by the United States. Sound familiar? The hero of the story learns the truth and has to battle opposing forces to reveal that truth.

Once I completed the manuscript I passed it on to my first readers, and a week later the first US coronavirus patient was diagnosed here in Seattle, and days after that the Life Care Center nursing home in Kirkland, Washington—about two miles from my house—was decimated by CoVid19. As the epidemic quickly turned into a global pandemic, it didn’t take long for the conspiracy theorists to blame China for a botched bioweapons experiment. And while the pandemic unfolded and the conspiracy theories spread, I was struck by the similarities between my novel and the real-life events happening in the world.

CoVid remains the third book in the McBride trilogy, and David McBride continues as the protagonist, although he is now known as Dr. David Aaronson (if you read The Organ Growers you will understand why). But, and this is a huge but, CoVid can be read as a stand-alone novel. There are references to David’s backstory that will pique the interest of uninitiated readers and, hopefully, encourage those readers to pick up the first two books, but I firmly believe you can read CoVid first—a flash forward, if you will—and still go back and enjoy the first two books of the McBride trilogy. Or you can simply read CoVid and come away satisfied.

Having said that, since CoVid is not currently available I suggest you read (or re-read) the first two books—the Organ Takers and the Organ Growers—while you are waiting. If you like books one and two, you will like number three.