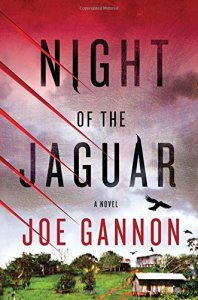 I recently reviewed a novella titled The Immortal Game written by Mike Minor, a fellow alum from the Pine Manor College MFA program, and if this review sounds a lot like that one it is with good reason.

In that review I praised Mike for the depth he brought to his characters and language. I mentioned how Dennis Lehane–one of the Pine Manor MFA founding faculty–taught us that good stories have depth of character, story, language and insight, and I commended Mike for accomplishing this in his writing.

In this review I will say the same about Joe Gannon and his story Night of the Jaguar. You see, Joe is also a graduate of the Pine Manor program, and it appears he has also taken Dennis Lehane’s advice to heart.

Night of the Jaguar is Joe’s debut novel, and it is an excellent first effort. The story is set in mid-1980s Nicaragua. The Sandanista guerillas have defeated the CIA-backed counter-revolutionaries (the Contra), and they now control the country. One of the revolution’s great heroes, Sandanista police captain Ajax Montoya, is a homicide investigator in Managua. As is the case with most fictional detectives, Montoya is saddled with his fair share of baggage–taking the fall for a high profile assassination, haunted by the ghosts of the revolution, shunned by a woman he still loves, waging war against the bottle, etc.

The story revolves around Montoya’s investigation of a murder that bears all the hallmarks of a Contra execution. Does this signal a resurgence of the counter-revolution? Is the CIA stepping up its efforts to destabilize the communist regime? If so, will anyone believe Montoya? As he mounts his investigation, the bodies pile up, a mysterious redheaded gringa enters the fray, and he fights to stay sober, sane, and alive.

The plot is compelling and stands on its own merits, but I ‘d like to point out (as I frequently do in my reviews) the artful writing that is the real strength of the book.

Following the death of a revered leader of the revolution, Montoya attends the wake, which is being hosted by his ex-wife. As he enters her home for the first time in quite awhile, the photo gallery that lines the entryway confirms his marginalized status:

He searched the wall and was heartened to see himself in one photo–a copy of the one he kept in in his drawer with her makeup bag. If the gallery was a map of her life, his photo had once been closer to the equator, but had since drifted to the far northwest. Any further and it would fall off the edge of the world.

While dancing with his ex-wife during the wake, her expression abruptly turns to panic and fear:

He turned to look, and felt as if his body did a somersault. At least on the insides. Whereas a moment before his blood had been headed south to the groin region where dancing with his still-sexy ex had held the possibility of a polite boner; now all that same blood reversed and rushed to his head where it already pounded at his temples until the colors of the sky and earth darkened.

The head of State Security had entered the grounds, and after publicly insulting this much-feared and much-disliked man, Montoya decides it would be best to take an early leave:

As he passed through the entryway, never, he knew, to return, Ajax stopped to look over the map of what had been their lives but was now only hers. He lifted his photo off the wall, the clean white square behind it like a sail that took him over the edge.

These are just several examples among many, but they serve to demonstrate the depth of language and insight that is all too often absent in genre fiction. As Dennis Lehane has shown with his body of work, through depth of story, character, language and insight (or what I call the Four D’s; look for my blog posts on the topic), genre fiction can be elevated to the level of literary fiction. Neither Joe, nor Mike, nor myself have achieved Dennis Lehane’s mastery of the written word, but as graduates of his program, we are at least headed in the right direction.

Listed below you will find the complete set of book bubbles for my short story The Final Push.   What are book bubbles? Bublish is a unique book-discovery website that uses “book bubbles” to create an interface between authors and readers. The bubbles contain excerpts from the text alongside author insights, and the author can create… END_OF_DOCUMENT_TOKEN_TO_BE_REPLACED

In Part 6 of the Me, Myself, and I interview, I describe how a crazed vigilante (Charles Bronson’s character in Death Wish) set my writing career in motion. In Part 7, I talk about how forced socialization amongst a group of writing students started me down the path to a Master’s degree in creative writing and… END_OF_DOCUMENT_TOKEN_TO_BE_REPLACED